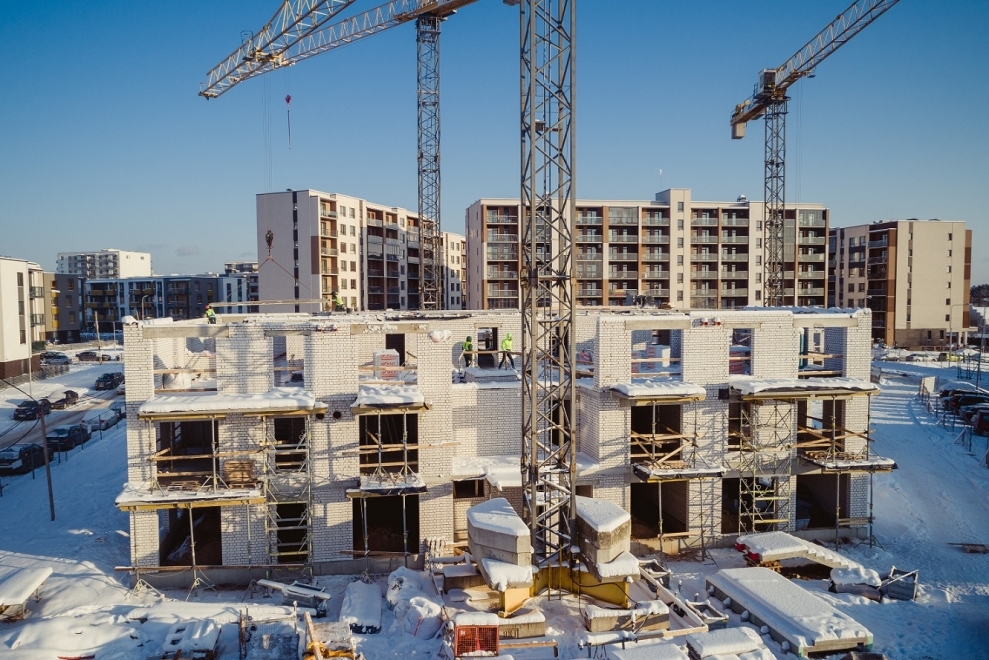 The Vilnius primary real estate (RE) market continues to slow down in the fourth quarter of this year. According to Realco’s data, 311 housing units were sold on the capital’s primary market in November, which is 46% less than this year’s average of 580 dwellings per month. However, a cooling market does not mean good news for buyers – there are no signs of falling prices of housing so far.

“There are several reasons for the home sales drop. For some time now, there have been rumours that there are almost no apartments left in built projects in Vilnius. Although the number of the dwellings sold in projects built in November was a few percentage points higher than in October, it is still less than a third of the total housing volume. Therefore, it is currently not easy to buy a home that the residents of Vilnius can move in without much delay. On the other hand, this year’s rapidly rising real estate prices have slowed down the desire to buy “paper” apartments, i. e. those at the stage of project proposals. People have become more cautious, preferring to invest in a property where construction is already much underway and completion dates are clearer,” Lukas Cicėnas, CFO of Realco, commented.

High-End Housing Was the Most Expensive

Expert of RE market forecasts that in the last quarter of the year the total number of new dwellings sold in the capital will be around 1,200, which is about a tenth less than in the third quarter and almost double the number of the sales in the first quarters of the year.

“The fourth quarter of the year used to be the most active on the real estate market, but this year stands out because buyers were most active at the beginning of the year, when the stock of housing in Vilnius was the highest. RE developers started the year with over 4,300 housing units on the market,” Realco’s CFO said.

According to Realco’s CFO, the average price of new apartments that are being sold has risen by around 13% within the year. The average price of apartments in Vilnius is currently reaching EUR 2,468 per sq m, compared to EUR 2,188 per sq m at the same time last year. Price increases are observed in all segments, but most of all in the premium segment, where the supply is the lowest.

“The faster growth in the prices of high-end housing is due not only to the limited supply of such housing, but also to the difficult situation on the land market. One of the main features that makes a house high-end is its location. In the central part of Vilnius, which is undoubtedly prestigious, the number of available land plots is extremely limited. It has been mentioned several times this year that there is a sharp increase in the price of land plots in the city’s most desirable locations, and the price of a plot of land is an important part of the final price of a house. In addition, the development of RE projects in the central part of the city is constrained by the requirements of the Department of Cultural Heritage and other organisations, as well as by the extremely high architectural and quality standards required of projects,” Mr. Cicėnas explained.

The expert estimated that this year, around 8,300 apartments and equivalent units have been planned in the project proposals that were made public, so there should not be a shortage of housing for Vilnius residents at least in the near future.

“That’s an impressive number. If the demand remains stable, the supply should soon reach it. Seeing the abundance of planned new RE projects, we can predict that construction contracting companies will be busy for years to come, and that there will be no decrease in the need for building materials or workers. There is therefore no reason for the sharp increase in construction prices at the beginning of the year to fall either. Conversely, in the absence of sudden radical changes in the market, apartment prices should continue to rise,” Finance Director of Realco forecasted.

According to the data of November of this year, 30% of the housing units for sale in Vilnius have not yet been started to be built, 41% are currently under construction, and 29% are already built.

With the RE market in the capital slowing down, Realco experts say they are satisfied with the company’s November results. The company has sold its last apartments and completed the exclusive project Šventosios Vartai on the seafront. The project 7 Vakarai in the capital’s Pašilaičiai neighbourhood, where the company has set up a demonstration apartment, has attracted a lot of attention this month.

Realco sold a total of 35 housing units in November, which is slightly below this year’s average, but very close to the November sales of the previous year. In total, the company sold more than 500 dwellings in Vilnius and Šventoji in 11 months.

Realco is currently offering housing in the Go Life and 7 Vakarai projects where construction is already much underway. The company is also developing the project Prie Vilnelės and is awaiting a building permit for the premium class project Algirdo 3.