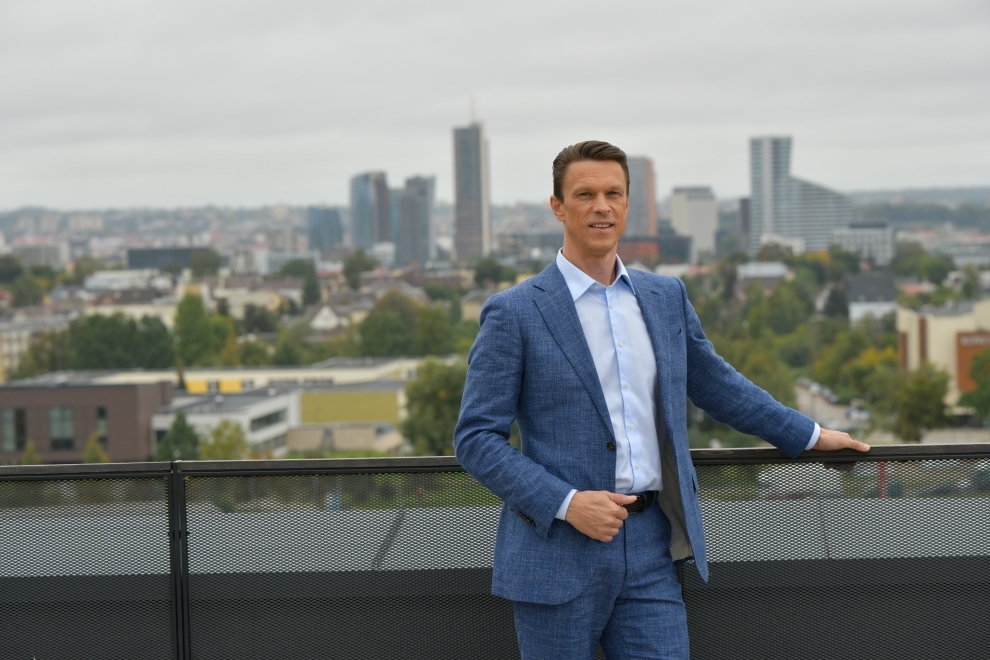 This year’s spectacular sales surge in the real estate (RE) market is heating up not only the passions of RE developers and buyers, but also a debate among economists on where the booming market will lead and how it will turn out. Julius Dovidonis, CEO of Realco, a real estate developer which is having a very successful year, believes that the lessons of the 2008 financial crisis have been learnt, but rationality is needed in a healthy market also.

The third quarter of the year was less active in the Vilnius primary RE market, but the nine-month results are good and have already exceeded the results of the whole pandemic year of 2020. What do you think about the growth of new housing sales in the capital this year?

This year we saw extraordinary growth in the real estate market, with both RE developers and buyers being active. The pandemic of 2020 prompted many in the country to look for a new home, and now we are still seeing the effects of the increased demand – dwellings are being bought from blueprints before construction work has even started.

Naturally, when one hears that a “housing bubble” may be forming and prices are rising, today’s housing boom is reminiscent of 2008, when real estate sales and house prices were also rising rapidly. Of course, younger buyers aged 25–30 probably don’t remember much of the previous financial crisis, so there are fears that another generation of the population is stepping on the same rake. However, we are old players in the market, so we have survived the 2008, and I must note that the current real estate prices in the capital have not yet reached the level of 2008 everywhere – such residential neighbourhoods as Karoliniškės or Šeškinė are lagging behind by 5–8%. The highest growth in real estate prices was in the central parts of Vilnius, in Naujamiestis and Paupys. However, the prices of some neighbourhoods have reached the old prices. For instance, in 2008, the price of 1 sq m in Ozas Park was LTL 8,200, which would be EUR 2,400 now, which is also the price of the Go Life project that we are currently developing.

However, the current situation in the real estate market is much more sustainable. Firstly, banks of Lithuania now lend money more responsibly, people are required to have a down payment, and their ability to buy a new home is assessed much more carefully. Secondly, people’s ability to buy real estate has also increased significantly compared to the situation 13 years ago.

The Bank of Lithuania recently announced the steps that could potentially slow down the market and help curb speculators. Do you think this could be a reason for the market slowdown in the last quarter of the year?

Responsible lending is not something new in Lithuania – banks in the country have been using protection mechanisms for a long time, and now we are seeing the consolidation of these measures.

However, only 12% of mortgage borrowers will be affected by the planned tightening of lending conditions. Like I said, the current conditions of borrowing money from banks are much more sustainable than in 2008, when people could use a bank loan to finance 100% of both the purchase of a home and its furnishing.

Realco can also be proud of particularly good sales results this year. You sold 433 apartments in your projects in Vilnius and Šventoji in three quarters, with a total area of over 21 thousand sq m. What has led to such good results?

Realco’s strong performance was driven not only by the favourable economic situation, but also by our existing stock of new housing – we launched the sales of three large projects in different classes during the post-pandemic period. Looking at the opportunities for RE buyers, we see that the country’s population has more savings and opportunities to buy a new home. Bank deposits of the Lithuanian population exceeded EUR 19 billion in the third quarter of this year alone, while the unemployment rate fell in the second quarter. Inflation is also driving investment in real estate.

It seems that the strongly active market has taught and encouraged people to buy dwellings from its blueprints. At the moment, you are one of the few developers in the capital who can invite buyers to come inside, or at least to see a project much midway through its construction. Is it a lucky coincidence, or did you expect the market activity in some way?

Most dwellings are still being sold as projects under-construction or from blueprints – the demand for real estate is so high that buyers are not willing to wait until they can walk into an already built house and choose the home they want.

We started building three projects practically at the same time, without any special planning – the speed of development of real estate projects is influenced not only by the developer, but also by the coordination of project documentation with various institutions. Today, some projects, such as 7 Vakarai, can be visited live, but the first-phase dwellings have almost all been sold.

The range of the projects you are developing has expanded considerably, from economy to mid-range and premium class projects. What determines this – the company’s strategy, the availability of land plots on the market, the needs of buyers, or something else?

We focus mainly on the mid-range segment, which is our core business. However, we develop both economy and premium class real estate projects when the attractive offers and opportunities for land plots arise. We are developing Algirdo 3 of the premium class, and 7 Vakarai of the economy class currently.

The number of available land plots in the central part of the city is very limited, although the new master plan of the Vilnius city has given real estate developers more freedom and opportunities. Which neighborhoods or parts of the capital do you foresee growing? Where are the best prospects for buying a home for living or investment?

Younger buyers are increasingly choosing dwellings closer to the city centre, while families are looking for larger spaces on the outskirts of the city for both, space and price, reasons. As the pandemic has changed the routine of many people to spend much more time at home, sales of larger apartments are increasing. The central part of the city, as well as Šnipiškės, Baltupiai, and Naujamiestis remain the most sought-after areas in Vilnius currently.

Finished dwellings are gaining popularity for several reasons. Firstly, it saves time by going for a full finish, and nowadays it is also a solution to the problem of rising costs of building materials and the lack of available contractors. We offer full finishes in the 7 Vakarai project, which is currently under development, and we are going to offer a full-finish option to the newcomers of Go Life in the near future.

Although slowly, we are approaching Western Europe and Scandinavia, where almost all apartments are sold only with full finishing. It seems that in a decade or so, or maybe sooner, the number of fully finished dwellings bought from us will be at least as high as the number of partially finished ones.

What are the future plans of Realco? How will you surprise the capital’s real estate market?

We recently celebrated our 15th anniversary and are one of the largest and strongest RE developers in the country. We will continue to strengthen our market position and develop exceptional, high-quality projects that meet buyers’ expectations. New mid-range class and premium class projects of multi-apartments buildings in Baltupiai and Antakalnis are in the pipeline, which we will announce shortly, as well as, of course, the impressive business centre Hero.